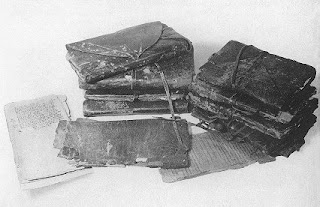 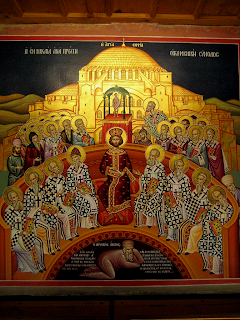 This painting at right depicts Arius at the feet of Constantine at the Council of Nicea in 325 CE. Arius disagreed with the Bishop of Alexandria, Egypt over the nature of Christ. He and his followers who objected to the idea of Jesus as god were banned from Alexandria around 321 CE and subsequently settled in Palestine. The Council decided that Jesus was "of one substance with the Father" and of a completely divine nature. This painting shows Arius on the floor in front of the Council. Everyone who sided with Arius was banished from the church. The church decided the divinity of Jesus, and so Christianity generally holds that view today.
The photograph at left is of the Gnostic Gospels, a collection of books which had been buried in an earthenware jar south of Alexandria in Nag Hammadi, Egypt. Discovered in 1945, these books date back to the 2nd century CE and contain 52 gnostic treatises, believed to be a collection that monks buried when such writings were denounced as heresy and banned.
People disagreed about Jesus' spiritual stature. The Church settled the issue, denounced and banished all who disagreed, and forbid possession of any letters or treatises that disagreed with their decree. That's how the New Testament came to be. Wow. God really does work in mysterious ways. Nowadays if one disagrees with the Nicean creed, or questions the divinity of Christ, he'll find a golden cross in his face and someone saying "Get thee behind me Satan" just like in the old days.
There's no question that some of the interesting books which were left out didn't fit very well with what they were pushing; so in order to make their New Testament look more legitimate, they just banned and burned those books. If you'd like to read some of them, many can be found at Amazon.com. They are pretty wild reading. I thought the book of Nicodemus was a gas.
The Lost Books of the Bible: The Great Rejected Texts
The Lost Books of the Bible
Posted by Kirby Clendenon at 10:21 PM