War In Heaven: An Idea Older Than The Old Testament 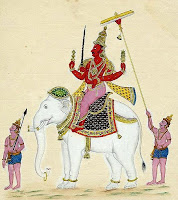 Here we see a painting of Indra which is currently in the British Museum. Indra is one of the ancient gods of the Vedic scriptures. The Vedas, ancient canonical texts of Hinduism, were first composed in the north-western region of the Indian subcontinent somewhere between 1700 to 1100 BC. That would mean again, that these scriptures were in place hundreds of years before the first scraps of Genesis, Exodus and Numbers were first penned by "J" the Yawist in the court of David and Solomon.
One of the four sacred texts of the Vedas is the Rigveda. In the Rigveda we find a collection of ancient Vedic Sanskrit hymns. They tell a story that involves the following characters: Tvashtri, Trisiras, Indra and Vritra.

Tvashtri was a god who was believed by many to have no father or mother. He created a son named Trisiras who had three heads. With one head he observed, with another he ate and with the last he read the Vedas. Trisiras became very powerful very quickly because he had three heads. Another god named Indra was jealous of Trisiras and cut off all three of his heads. Trisiras' father Tvashtri was angry and created Vritra, a large dragon, to harrass Indra.

Prior to the Vedas, the Aryan civilization believed there was harmony in heaven. So this new development in their Vedas introduced the idea of "war in heaven" 250 to a 700 years before "J" began writing the first segments of the Old Testament of the Bible. Many interesting parallel plot lines can be seen such as father gods with no parentage, gods with three heads (trinity-like), evil jealous gods making war with the god's son, dragons, and last but not at all the least war in heaven. It was certainly a idea-rich environment as "J" wrote down the national history of Israel.

This may be the very spot in history where the idea of war in heaven came from.
Posted by Kirby Clendenon at 11:30 AM