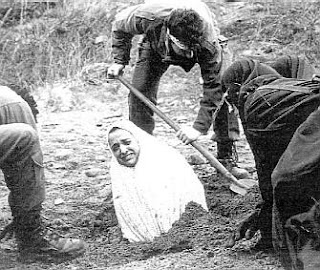 "If a man is found sleeping with another man's wife, both the man who slept with her and the woman must die." Deuteronomy 22:22

While it is true that the New Testament goes easier on women caught in adultrey, and simply tells her to stop doing it, it is too bad that those who failed to get the message and still revere the laws God allegedly gave to Moses, go on burying the women up to their breasts and then stand around and bash their heads with rocks.

It would seem more sporting to me if God would have let them give her a 100 cubits head start and then they could pursue her on their camels. At least she would have a chance.
Posted by Kirby Clendenon at 4:11 PM