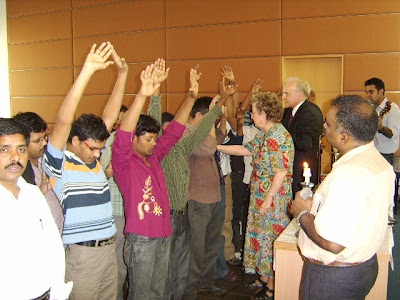 Charismatics generally believe in both the "Baptism of the Holy Spirit" and the "Gift of Tongues."
"The Gift of Tongues" (I Corinthians 12:7-11) is when they believe the Holy Spirit, at his discretion, moves upon an individual to deliver a public message through a believer, howbeit not in any language generally understood by those present. It is to be followed by another message which is supposed to be the interpretation of the first message, understandable to those present. See I Corinthians chapter 14.
But to charistmatics, this does not rule out a "prayer language" for use by the individual in their own prayer life. They believe that anyone who accepts Jesus may receive this prayer language, and that it is evidence that one has in fact received the Holy Spirit. They note that in the early Christian church, the Bible records believers receiving the baptism of the Holy Spirit many ways: in Acts chapter 2 the believers were simply waiting in one accord for the promised Holy Spirit. Acts 2:38 says "Repent and be baptized, every one of you, in the name of Jesus Christ for the forgiveness of your sins. And you will receive the gift of the Holy Spirit." Acts 8 16-17 shows a case where some had been baptized in the name of the Lord Jesus, but had not yet received the Holy Spirit, and so they placed their hands on them and then they received the Holy Spirit. In Acts 10:44-46, The Holy Spirit came upon the believers as Peter was preaching. They began speaking in tongues and praising God. In Acts 19, some had only been baptized for repentance, but nothing else. So they baptized them into the name of the Lord Jesus, and then subsequently placed their hands on them. Then it says the Holy Spirit came on them and they spoke in tongues and prophesied.
So to charismatics, the baptism of the Holy Spirit can happen at almost any time after you receive Jesus, during waiting on God, while someone is preaching, or when hands are placed upon you. They don't care as long as you get it, but to be sure they usually place hands on you and encourage you to speak in tongues.
They are harshly criticized by some for speaking in tongues as a "prayer language," but I believe an honest reading of I Corinthians 14 is describing something different in their personal life than what takes place in public.
And I'll say this one thing more in defense of charismatics. Mark 16 says that certain signs would accompany those who believe. Those signs include driving out demons, speaking in new tongues, handling snakes, not being hurt by drinking poison, and laying hands on sick people and seeing them healed. Almost everyone who criticizes charismatics for speaking in tongues cannot point to one instance in their own lives where they have spoken in tongues, driven out demons, not been hurt by drinking poison or laid their hands on the sick and seen them healed.
Next post will be Gift of Tongues: My View. It's bound to get everyone upset, so I'll see you then.
Not much time left, take the ANONYMOUS POLL over in the column at the right, so I can get a representative sampling.
Posted by Kirby Clendenon at 2:13 PM