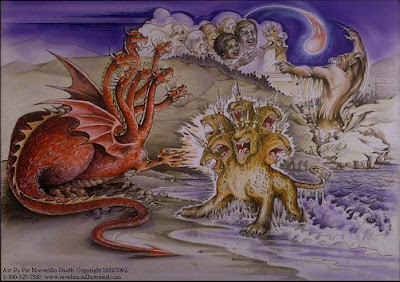 Mostly, Seventh-day Adventists view the tongues issue through tinted glasses. Most Adventists, believe that the "remnant of her seed" mentioned in Revelation 12:17 refers to the Seventh-day Adventist church, or at the very least those who keep the 7th day Sabbath and believe in Jesus. In this verse they see that in the last days Satan will wage war against them, the last remnant of true believers.

As they interpret all the other imagery of this colorful book, they see it all focusing on those who keep the Sabbath and believe in Jesus. They believe that Protestant Christianity will join forces with Spiritualism (with which they clump Charismatics and "gibberish" type of tongue speaking) and Catholicism. They believe this 3-fold union will ultimately bring about the forces which cause them to be persecuted.

So, they are very uncomfortable with ecstatic tongue speaking that edifies the one speaking. They generally believe that it is of the Devil; and is one of the areas upon which Protestantism, Spiritualism and Catholicism are able to find common ground and thus strengthen their unholy union.


So if you speak in tongues during a Seventh-day Adventist service, most likely you will be quickly silenced or moved to the back room. Only a new convert would try such a stunt, so they may be extended grace once, but they will soon teach them Adventist doctrine on the subject , running them through a series of studies on Daniel and Revelation until they understand that the gift of tongues, should it ever occur, will be in a language currently known to mankind and will be for the purpose of edifying those to whom the gospel is being preached. For example, an English speaking minister in Africa might be heard by someone who does not speak or understand English in a language understandable to that person. No prayer languages or ecstatic utterance allowed. And if someone raises both hands unto the heavens during a meeting, leadership will have their eyes on them and will keep close watch that they aren't one of those charismatics.


Baptism in Seventh-day Adventism is by water in accordance with the example of Jesus when he was baptized in the Jordan River. At that time the Bible says the Holy Spirit descended upon Jesus like a dove. No attention that I have ever witnessed is given to the example where Paul laid his hands on the new believers later in the book of Acts, and they began to speak in tongues and prophesy. So they emphasize water baptism and let the Holy Spirit descend as and when he pleases. They have been criticized for not laying hands on the believers, so when the water baptism takes place, one arm supports the candidate, and one hand goes over the candidates nose. So nobody can criticize them for not laying on hands then, or they would come up sputtering water. Following the immersion, the Pastor will generally pray for the candidate. They will put a hand on their shoulder or hold their hands, but usually they will not lay hands on the candidates head. Adventism teaches that no actual power is transferred to another by the laying on of hands anyway. Additionally, if that candidate has been watching Sunday morning television and comes up babbling in tongues, they would have the uncomfortable job of explaining that to the congregation as well as muzzling the candidate. So when it comes to praying for new believers and that believer breaking out in tongues, they try not to go there, and hope it doesn't happen on their watch.


At the Seventh-day Adventist website, in their Statement of Fundamental Beliefs , water baptism takes the front seat along with Repentance and the Holy Spirit guiding you into truth, the obvious omission of specifically mentioning the Gift of Tongues, bespeaks their extreme discomfort with the subject.

The next two Posts will be "Gift of Tongues: Charismatic View" and finally, "Gift of Tongues: my view.
"
Please join the fun, and vote in the "secret ballot" poll in the right hand column. It will be enlightening to see how you feel on this subject. Not even I know how anyone votes.
Posted by Kirby Clendenon at 1:38 PM