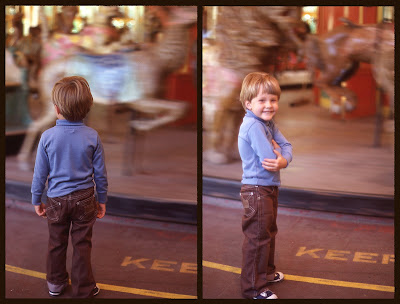 In Surrender of Sovereignty, I mention the bitterness I struggle with regarding how religious beliefs that I now consider "incorrect, crippling, and unfounded" affected what we could or could not do with our children.
The photos at the left were taken at Fleischaker Zoo in San Franscisco. None of the photos I've taken over the years touch me more than these two. But first, let me give you some background.
At the time, we believed the Bible and were 7th-day Adventists. Such belief, keeping the seventh day sabbath, is not without support from the Bible. It is true, that we emphasized the portions of the Bible which seemed to back up our denomination's peculiar beliefs. Paul's letters were difficult for us, but the Gospels made more sense. Without question, dozens of other denominations were emphasizing the verses in the Bible that promoted their corner of Christianity. But, as Adventists, we also accepted our church's special messenger, Ellen G. White. Our beliefs pertaining to how we observed the seventh day sabbath of Exodus 20:8-11 were guided by both the Bible and EGW's writings.
The Bible spelled out the idea clearly in Exodus: that on sabbath, we were to do no work, nor were we allowed to cause anyone in our employ to work either. Catholicism's Council of Trent moved the 4th commandment to the 3rd commandment's position and watered it down, removing all the labor restrictions it originally held. It was rewritten to read, "Remember the sabbath day, to keep it holy." Well, we were Protestants and we weren't going to take the Catholic view. In addition, we felt keeping the 7th day sabbath was an important sign of our loyalty to God, and we accepted EGW's revelation on the subject from Review and Herald (September 19, 1854), where she says the following: "Parents, above every thing, take care of your children upon the Sabbath. Do not suffer them to violate God's holy day by playing in the house or out of doors. You may just as well break the Sabbath yourselves as to let your children do it, and when you suffer your children to wander about, and suffer then to play upon the Sabbath, God looks upon you as Sabbath-breakers."
Now, lets go back to these two pictures. They are of my oldest son. He was about 4 years old, and we were visiting San Franscisco. Of course we had bought picnic food on Friday so we wouldn't have to make people work for us by going into a restaurant on Saturday. Of course, we looked for something to do that was acceptable on sabbath. We decided to take our son to Fleischaker Zoo and let him marvel at God's creation. All was going well, and we had not spent any money nor made anyone work for us who wouldn't already have had to work anyway.
And then we came to the Merry-go-round. The calliopes were playing and the colorful characters on the Merry-go-round were going up and down and around. And my son was full of amazement and happiness. That is, until I took him aside quickly and explained that a man was operating the Merry-go-round and we should not make him work for us on sabbath. My son wasn't happy with this development, but he was used to this kind of crap on a regular basis, so he didn't make a fuss. But just then, a light went off in my concrete head. I thought to myself, "I wouldn't want to serve, much less even like a God who for any reason wouldn't let my son enjoy this wonderful moment." I checked with my wife, and she agreed. If what we believed prevented my son from enjoying this special moment, then something was wrong with what we believed.
It was my first experience of responding to my own sense of reason rather that what some man or woman had written about what God wants me to do. It felt wonderful. So I turned to my son and said, "You can ride the Merry-go-round." And then I took these two wonderful pictures. They have always served to remind me that in my life, at least, I'm going to trust my common sense and reason before I trust the writings of men or women. And just because the writings of man claim to be God's words doesn't mean that they are. And just because the Bible says, "There is a way that seems right to man, but the end thereof is destruction," doesn't mean I have to follow blindly and not pay attention to what seems right. From this day on, I began to look at the Bible story differently. I asked myself if the stories and ideas of the Bible were reasonable. My book explains how that turned out.
Posted by Kirby Clendenon at 6:31 PM


Hello! I've been following your web site for a long time now and finally got the courage to go ahead and give you a shout out from Austin Texas! Just wanted to say keep up the fantastic work! paypal mastercard login