The Arrow That Flies By Day 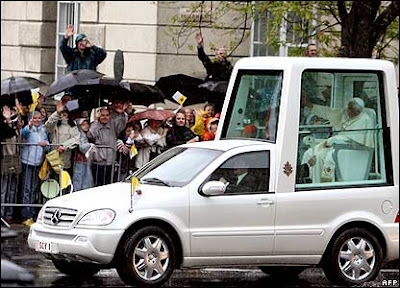 Psalms 91:5-6
5. You will not fear the terror of night, nor the arrow that flies by day,
6.  nor the pestilence that stalks in the darkness, nor the plague that destroys at midday.
I know the Pope takes a lot of cheap shots.  And I'm guilty of that too.  But for Catholics, the Pope is the Supreme Vicar of Christ on Earth.  Both Tertullian and Eusebius testify to the fact that when the Apostle Peter was crucified, that he asked that it be done with his head pointed down, as he did not consider himself worthy of being put to death in the same manner as Jesus.
But still, Psalms 91 says that you will not fear the arrow that flies by day.  Maybe that was for those days.  Now this Pope-mobile has 2 inch bulletproof glass in case people put their bows and arrows away and decide to use a gun.  I don't blame the Pope, because there are a lot crazies out their wishing him ill, but he must not be confident that he is "dwelling in the secret place of the Most High" as the first verses in Psalms 91 say.  He doesn't want to leave his safety to Providence.  Or, maybe Psalms 91 is the beautiful, poetic hyperbole of King David and can't be taken literally.
But don't get self-righteous and comfortable though, Protestants, as I have some Psalms 91 thoughts for you in the near future as well.  Ha.
Posted by Kirby Clendenon at 10:35 PM