Creation Myth 800 Years Before The Bible Was Written 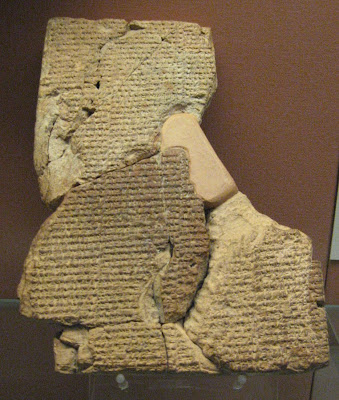 At left is the Cuneiform tablet which contains  the 18th Century BCE Epic of Atra-Hasis.
Keep in mind that this Babylonian story precedes the writing of the Christian Old Testament by about 800 years.
It tells of three Sumerian gods, Anu, Enlil, and Enki.  It seems that by casting lots, they decided Anu would rule the sky, Enlil would rule the wind, and Enki would rule the water.  Enlil assigned some lesser gods to do the farm labor and maintain the rivers and canals.  But after a few years they grew tired of the strenuous labor.  Enki suggested that they create humans to do the work for them.
To create the humans, they made clay figurines mixed with flesh and blood.  All the gods then spit on the clay figurines (sounds a lot like the Bible story where God created Adam out of the the clay and breathed into it).  After ten months, a specially made womb bursted open and humans were born.
After overpopulation of humans during times of drought and famine, Enlil made a decision to destroy humankind with a flood.  Enki warned a hero named Atr-Hasis and told him to dismantle his house and build a boat for his family, sealing the door.  The storm and the flood lasted seven days.  Atra-Hasis then offered sacrifices to the gods.  The god Enlil had a huge disagreement with the god Enki about his warning Atra-Hasis, but they eventually came to an agreement on how to control human population.
Is this a corroborating story with the Bible's creation story, give or take many important details?  Or is it a creation myth concocted by the Babylonians 800 years before the writer "J" began to write the first scraps of Genesis, Exodus and Numbers?   The epic of Atra-Hasis is some of the oldest literature ever discovered.  Was it then drawn upon by a writer in the court of Solomon 800 years later, commissioned with the task of writing a national history for Israel so that it could hold its head high among the other nations of that time? 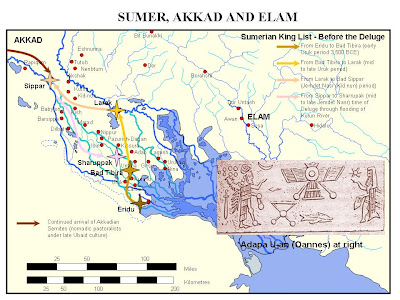 Many of the kings listed in this early literature lived in the flood plains of the Euphrates and Tigris rivers.  This area was plagued with cycles of extreme flooding.  Eight kings are listed who reigned before this flood, and they ruled for periods of time ranging from 18,000 years to 43,000 years each.
Doesn't this sound like myth and legend: great stories for "J" to draw upon in his (or her, as some believe) saga about a king named Jehovah?
What do you think?
Posted by Kirby Clendenon at 12:25 AM