The Comfortable Pew of Never Questioning 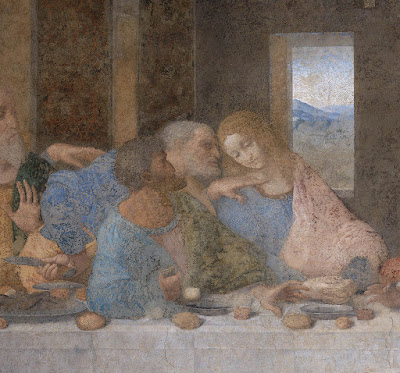 Most folks who warm their comfortable pews each week in church don't pay much attention to things like the glaring contradiction in Da Vinci's painting The Last Supper.
During the war, much of the building where the painting exists was destroyed. The painting on the wall was saved, and the building rebuilt.  In 1999 the painting underwent restoration, and it was found that underneath previous restorations existed Da Vinci's original work of art.
The figure just to the right hand of Jesus, who has been traditionally considered the disciple John, turned out to obviously be a woman. Her features are very feminine.  She wears a necklace.  Even today we can read in Wikipedia,  "Peter looks angry and is holding a knife pointed away from Christ, perhaps foreshadowing his violent reaction in Gethsemane during Jesus' arrest. The youngest apostle, John, appears to swoon."
Isn't it amazing how hard it is for folks to take a fresh look at something and admit they're wrong.  Once the paint covering up Da Vinci's original painting was cleaned off, the person to the right hand was obviously a woman.  Yet even in Wikipedia they insist that it is a man. 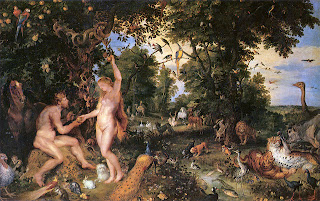 First of all, I find this a very human trait.  We all do it. But having recently gone through the experience of opening my eyes and taking a fresh look at religion and Christianity, it seems also true that folks don't like changing their minds about what they have grown up to believe is true.   My book's case in point: The War In Heaven and The Garden Of Eden scenarios.
Preposterous stories written around the 9th to 10th century BC in the court of David and Solomon depicting fantastic legends several thousand years earlier are still held by religious folks to be literally true today.  Stories about axeheads floating in water, woman being created from one of a man's ribs, a blind man killing 1000 men with the jawbone of an ass, folks going up to heaven in a cloud, a young man killing a giant with one shot from a slingshot, and many many more fantastic legends are considered true and not questioned.
I think changing one's foundation once one has been living in their house for a while just threatens folks' security too much.  But it can be done.  In the next post, I'll discuss examining your foundation and laying a new one.

Posted by Kirby Clendenon at 11:06 AM