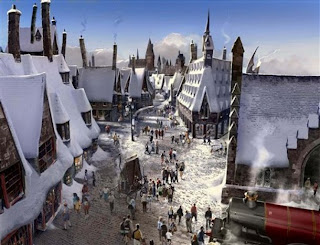 The Harry Potter book series, then the movies and now Universal Studios' The Wizarding World of Harry Potter are perceived by most Christians as the Devil's plot to captivate the minds of children and turn them into Wiccans and Devil worshipers.  Many of them are reasonably comfortable watching the 1939 classic The Wizard of Oz, which is all about good witches, bad witches and wizards; but the problem with Harry Potter is that is makes it look so harmless and so fun.

When one believes, as I do, that the Bible is a book of human origin and does not portray cosmic reality, there is freedom to experience enjoyable things that used to be taboo   If the Biblical concepts of the Father, the Son, the Holy Spirit, angels, demonic spirits and the Devil are shown to be questionable and hard to believe, then worrying about make-believe characters like Santa Claus, the Easter Bunny, Spiderman and Harry Potter cease being anything more than fictional tales for enjoyment. My posts for the months of April and May as well as my book, Surrender of Sovereignty, explain why I believe the idea of Satan was concocted to bring fear and drama into the Bible's narrative to compete with contemporary religions of that period of history.  Archfiends were common in nearly all religions at that time, and inclusion of a great adversary at war with God was popular and easy to sell.

But now, enjoying freedom from religious dogma and superstition, I am free to enjoy anything.  Restricted only by my ownership of the responsibility for my actions and my ideal for what person I wish to become, many harmless and enjoyable activities are no longer on my "can't do" list.

This weekend I was able to go to  Universal Studios in Orlando, Florida while visiting our son and his wife.  I found the Wizarding World of Harry Potter harmless and very enjoyable.  Ollivander's Wand Shop was really well done and very fun.  Butterbeer was different and quite tasty.  But for all those who feel that this all plays into Lucifer's plans, I can only say that I don't agree. The wand I bought doesn't even spark or light up, but it is a fun souvenir.   But the make-believe world of Harry Potter was a lot of fun.  The rides made me sick to my stomach and reminded me that I'm getting older.  The Halloween festivities were scary and quite enjoyable in the evening. As the evening became darker, vacant Universal Studio movie sets that were prepared for Halloween became hazy and as you walked down the dark streets you might be charged by some fiend with a chainsaw in his hands.  It was all in good fun.   But since I do not believe in the Bible, good angels, bad angels, Satan, or evil spirits. it was nice to just enjoy the theme park without a lot of guilt or hangups.
Posted by Kirby Clendenon at 8:59 AM