Faith is trust in or belief in someone or something.  There are different  kinds: earned faith, required faith, and invested faith.

Earned Faith
When I met my wife, I knew very little about her other than that she was cute, and she owned a car. We dated, we became engaged, and we married.  We have now been married for forty-two years.  I have a lot of faith in her.  She has earned my trust by consistently treating me with love, honesty, and honor.  I did not have that faith in her when I first met her.  She earned it.

Required Faith
When we are required to pay for something before we get it, it is more or less a required faith or trust.  We can sometimes check customer ratings to bolster our nerve a little, but basically we have to lay down the cash before we can get what we want.  It's not the way we would want it to be, but it's required.  If we don't pay the money, we don't even have a chance of getting what we want.  Like accepting the "terms of agreement" for a software we are downloading on the internet, it you don't accept the terms, you're not going to get the software.

Invested Faith (response to Required Faith)
When faith is required of us, we sometimes have to invest our faith.  Putting it out there, even though it hasn't been earned, hoping that we don't get burned and that our investment of faith and trust brings us the return we hoped for.   An interesting thing happens when we choose to invest our faith in an entity which requires it.  We want to believe that we made a wise investment.  Friends may tell us we're crazy for making that investment; but we tend to support the idea of our investment as well as the requiring entity, if for no other reason,  so that we do not look stupid and unwise in our investing. 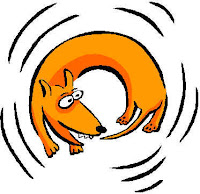 Christianity is an interesting blend of these types.  Most Christians would say that their faith in God is earned: that God loved them, sent his Son and rescued them from sin and death.  But that is not really how it works.  I believe that the Christian experience starts with required faith, quickly followed by invested faith.  And then following a period of indoctrination and ethereal experimentation, it assimilates, retroactively, the false idea that the initially required faith,  responded to by the believer with invested faith, was actually EARNED.  We will dissect this idea in the next post.

I think if you choose to hold a differing view, my next post will clarify my position for you so that you can at least have a clear target.  Good day. :-)
Posted by Kirby Clendenon at 7:54 PM