Will The Defendants, Jesus And The Bible, Please Rise? 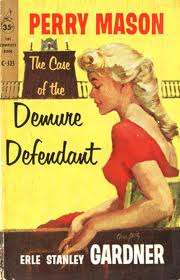 If belief in the Bible, Christianity, the virgin birth, the Garden of Eden, the war in heaven or the resurrection of Jesus were put on trial, would there be enough evidence to get a conviction?  Or would we find that all real evidence is circumstantial at best, and that the evidence has been tampered with?  It is my belief that 99.9% of folks who are either born or raised under the canopy of faith in the Bible as God's word cannot look at these questions without bias.

Today, someone asked me, "Don't you believe the Bible?"  I answered, "No."  They countered, "But the Bible says that all scripture is given by inspiration of God."  It's like their minds have been warped.  Such an objection would never be taken seriously in court because the  Bible is stating within its pages that it is indeed inspired.  But in conversations, Christians do the same thing with regard to the existence of the Devil.  I tell them I do not believe that a being named Lucifer or Satan exists.  And they generally retort something like, "Where do you think sin came from?"  And I retort, "Sin is a concept taken from within the Bible.  I don't believe we are born sinful either."  They usually respond something like, "What about all the bad stuff that happens in the world?"  And I remind them that a lot of beneficial things happen in this world as well.  Why do things that we find unpleasant or counter-productive to our health and life have to be caused by some evil being?  And what about the resurrection of Jesus?  Is there any solid evidence that the historical man, Jesus, did actually resurrect?  Only the Bible says so.  The Bible also says, in Matthew 27:50-53, that when Jesus died, the graves of many saints were opened.  And then, three days later, when Jesus allegedly resurrected, it says that these saints, whose graves had been open for three days, resurrected and walked about in Jerusalem and showed themselves to many.  Of course this book, named Matthew and written by some believer 50-60 years after this alleged miraculous event, seems to readers today to be written at nearly the same time.  50 years later, some believer writes about this miraculous event, and yet nowhere in anyone else's journals or writings is such an event mentioned.  It looks made up.

When a person is raised within the confines of Christianity or other religions, proof never becomes an issue unless you are willing to question the beliefs you've always taken for granted.  And there is no greater deception than to portray a set of beliefs as being too holy to question.  Whatever entry level one comes into Christianity, the first step is usually an act of faith.  And how many are ever "sovereign" enough to ask why it is that faith is even necessary?

In the next post I will discuss faith.
Posted by Kirby Clendenon at 6:43 PM