Divorce In Monotheism's Cafeteria Of Doctrines 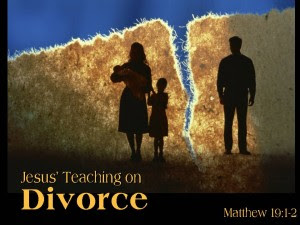 If you believe what the Bible says Jesus said, then you can only divorce if one of you is UNFAITHFUL.  The implication is strong that it is speaking of sexual unfaithfulness.

If you believe Judaism, a man may divorce his wife for any reason, even if he finds another woman more attractive. However he must have her consent.  All a man would have to do is make his wife's life miserable until she gives the consent.  The divorce is accomplished by a specific process of writing and delivering a "get" to his wife freeing her to marry another man if she desires.  Sounds a little like what one might say to a bothersome dog: "Get!."

If you believe what the Bible records Paul saying, then you can also divorce if one of you is an unbeliever.  Paul also indicates that you might do well not to marry at all so that you can focus on your relationship with God.  No mention here of permission to abuse the Altar Boy though!

If you believe what the Quran says, a man may divorce his wife by simply saying "talaq" once to his wife.  Apparently he may take her back twice, but if he divorces her by saying "talaq" a second and a third time, then they are permanently divorced.  That is, until she remarries, has sex with her new husband, and then gets divorced from him.  Then the first husband may take her back even again.  Sunni Muslims, unlike those who practice Sharia law, believe that if a husband says "talaq, talaq, talaq" (the triple talaq) all at one time, the divorce is permanent.  Other Muslims believe this is a hangover from pre-Mohammed days and is a perversion of the Quran. 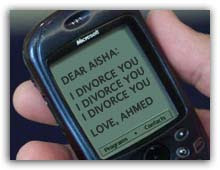 But what would you expect from religions who all believe the story of Adam and Eve in the garden.  Man was created first.  Then woman was created from his rib mainly because he needed companionship.  Then Eve was the weak one who conversed with the talking serpent and ate a piece of the forbidden fruit.  Then Adam succumbed to her invitation to also eat of the fruit, and thus fell like Eve into sin.  Both got kicked out of the garden; but God cursed the ground, not Adam, and made his work harder.  The woman, however, got a personal curse that made childbirth harder and more painful.

Why is it that monotheistic religions are so hard on women?  I believe that in most early civilizations men ruled predominantly because of their body size and strength and subsequent mental subjection of the women's minds to believe they must be submissive or get the stuffing beat out of them.  When David and Solomon commissioned the writing of the first scraps of Genesis, Exodus and Numbers around the tenth century BC, male chauvinism was already prevalent in cruel societies in the world; and the writer "J" included the idea in the story of the Garden of Eden.

I recently read an article in the National Geographic magazine, published in March of 2010, depicting how in Southern Ethiopia, children whose upper teeth erupt before the lower teeth are killed.  It is considered mingi: bad luck.  Some of them are abandoned in the desert with dirt stuffed in their mouths.  When I read of such insane practices, I wonder how, in this modern age, such ignorance can exist.

But when I read how monotheistic religions subjugate women and ruin lives with their insane beliefs regarding the relationship of men and women, that were derived from myth and legend, I wonder how modern human beings can be so ignorant as to believe such nonsense in this day and age.  Are women the weaker sex?  I would suggest that they are the stronger sex for putting up with all the ridiculous male dominance still alive in the world today.  By the way women, I'm not much for pushy, bossy women either.  But you do deserve some grace considering  how we have historically treated you.
Posted by Kirby Clendenon at 12:20 PM