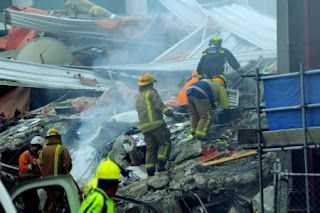 An emergency team reunited Ann Bodkin with her husband after a painstaking rescue from the twisted metal and concrete remains of the Pyne Gould Guinness building. Coincidentally, giant sunbeams burst through the city's grey, drizzly weather as she emerged.
"They got Ann out of the building and God turned on the lights," Christchurch Mayor Bob Parker said.
Read more: http://www.foxnews.com/world/2011/02/23/75-dead-300-missing-new-zealand-quake/#ixzz1EoEhXvI8
Tragedy frequently seems to render the faithful eloquent. If God is willing to part the clouds to give a few rays of sunlight, then it follows that he or she would be in control of the earth as well. Why would any supreme being allow the earth to shake and kill hundreds of innocent people, and then pull the clouds apart to give them a few brief rays of sunlight? The absurdity of Christian thought almost leaves me speechless, but obviously not totally speechless.
I send my heartfelt condolences to all those who have suffered loss.  To Christchurch Mayor Bob Parker, "Way to promote hope and keep the illusion alive!"
Posted by Kirby Clendenon at 3:37 PM