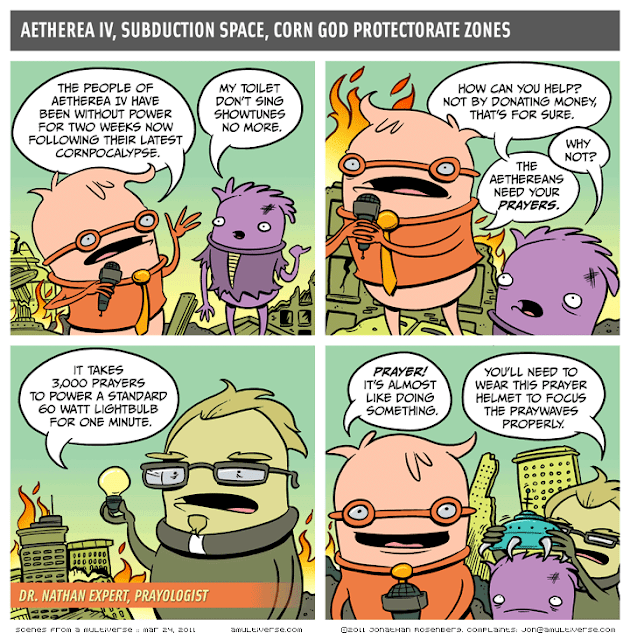 As I mention in my book, I challenged my wife to a Pray-Off for a month.  She prayed to Jahweh, the Father, in Jesus name, and I prayed to the lamp in my living room.  We kept track of what we were praying for and how well our prayers were answered.  It was a draw.  I would be willing to run the same challenge again for any length of time.  The only effect of prayer is the hypnotically suggestive power it has on our brains.
Posted by Kirby Clendenon at 11:34 AM No comments: Links to this post

Tip of my hat to NonStampCollector for this amusing and entertaining video.
Posted by Kirby Clendenon at 7:02 PM No comments: Links to this post

This is a time to help.  If you've read my book, you'll understand why I don't think prayer is going to do a damn thing for the Japanese.


Here are two ways we can really help: donate money to organizations who can make a difference: the Salvation Army and the Red Cross.  Please consider donating something to help the Japanese at the following sites.
To donate to the Red  Cross, go to this link: http://www.redcross.org/


Posted by Kirby Clendenon at 4:45 PM No comments: Links to this post

I wish I could say I've never had anything to do with this kind of thing, but I have.  The Pastors push so hard on you that if you're submissive to what's going on, you don't resist and fall down.  Once down, you don't want to admit you're faking it, so you keep your eyes closed.  Some folks thrash around to add a little realism.  In some cases folks see what's happening and want to believe it will happen to them, and when the Pastor shouts at them, or whacks them with his hands, or snaps them with a town like this guy did, folks go along with it and fall down.  I was an Elder in one of these congregations, and I believe this stuff is pure BS plus a little light hypnosis to boot.  Hypnosis, as many do not realize, is frequently accomplished within the realm of consciousness.  The subjects will swear they were not hypnotized,  but then  follow the suggestions that were made to them by the authority figure while they allowed themselves to be in an receptive and easily suggestible state.
Posted by Kirby Clendenon at 12:38 AM No comments: Links to this post