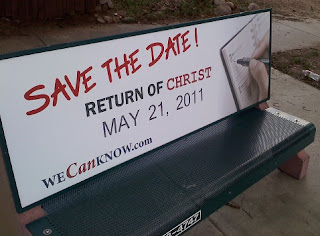 I have consistently advocated, through articles in this blog, that neither the Bible nor the Koran could possibly be God's Word.  The reasoning behind my claim is that such documents, when placed in the hands of men and women possessing a multitude of levels of sanity and living conditions, is like placing a loaded gun in the hands of a child.
Both scriptures evoke one of two responses.  The first, which is more commonly seen, is to settle into being either a "Jack-Christian" or a "Jack-Muslim," following the passages which are palatable and ignoring those that are not.  The second response, which is not as common yet far too frequent, is to fervently read, meditate upon, and act out all that is found within the Bible or Koran's pages.
Case in point for this week is the return of Jesus Christ to rapture his saints to heaven.  So far nobody has lost their life over this one, but a lot of folks are giving up their life savings and financial security to spread the the "good news" of the Earth's destruction.  Consider this article of a man in New York who has spent his life savings to warn his city.
Man Spends $140K  (click on the link to view)


Although this present outbreak of faith seems fairly harmless, I caution everyone to remember the loss of life which occurs frequently from believing and acting upon the Bible or the Koran.  In my past blogs I have recounted the stories of mother's killing their children, husbands cooking and eating their wive's, people being stoned to death because of sexual practices not acceptable to religious leadership or groups.  Just this week it has been reported that Usama bin Laden's compound had a significant stash of pornography within its walls.  And the CIA reports that many fundamentalist religious fanatics are found to have lots of pornography on their computers.  Yet if a woman commits adultery, she is planted in the ground like a fencepost and beat to death by stones. 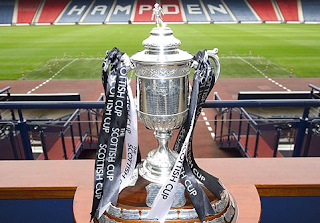 A supreme being would not oversee the compilation of a book to be his words to humanity that could be so misconstrued and acted upon.  I have stated repeatedly that such an act by god would be tantamount to placing a loaded gun in hands of a child.
On May 21st (next week) I'd rather put my money on one of the teams at the Scottish Cup Final at Hampden Park in Glasgow than waste my savings acting out a fragmented fanatical fantasy that Jesus was returning to rapture his saints.
Posted by Kirby Clendenon at 10:11 AM