Biblical Exorcism: The Lackluster Power Of The Name And Blood Of Jesus 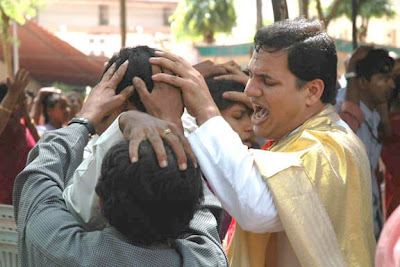 The Bible records Jesus saying, in Mark 16:17, "And these signs shall follow them that believe; in my name shall they cast out devils."  Consistent with the Bible's habit of being inconsistent, Mark 9:29 showcases a kind of devil whom Jesus said could only come out by "prayer and fasting."

Exorcism isn't faring too well these days, and I'd like to point out some of the major problems I see with it.  By the way, when I was an Associate Pastor a few years back, I was asked by our Pastor to assist him with an exorcism of a man who had requested it.  It was a fiasco, by my account, and left me wondering about the credibility of the practice.


Problem #1:  The Power Of The Name And The Blood of Jesus seems powerless.

The Bible records Jesus as making a false statement in John 14:12: "I tell you the truth, anyone who has faith in me will do what I have been doing.  He will do even greater things that these, because I am going to the Father.  And I will do whatever you ask in my name, so that the Son may bring glory to the Father." Supporters of Christianity are quick to point out that this does not apply to a believer if he asks for something foolish like a BMW or a Cadillac.  I won't get into that except to say that I do not see why they should make that distinction since, apparently, Jesus didn't.  But for the sake of argument, let's say this verse applies only when believers do good or spiritual things.  Wouldn't casting out a devil or two qualify as prime opportunity to invoke the name of Jesus?  In my experience, invoking the name and the blood of Jesus was not effective in the exorcism with which I was involved.  The man would slow down a little, but eventually he just kept going.  We would say, "In the name of Jesus and by the power of his blood, we bind you from cursing and taking the name of God in vain any further."  The guy would quit, but a minute later he would be back at it again.  Retrospectively, I see it as a sham on both sides.   With regard to the man whom we were exorcising, I think he was just playing us.  I think he couldn't afford cable, so he probably had a hobby of going around and getting gullible fundamentalist clergy to spend the evening letting him cuss at them and act out the character in his mind.  You have to admit, it would be a little entertaining.  He'd slow down a little to let us think we were getting somewhere, and then he would go to something else or start it up again a few moments later.  It was pathetic to say the least.  It seems to me, that if the name or blood of Jesus had any power, it would have had closed the deal with this guy.

Problem #2: If Jesus' Name Is The Power Behind Exorcism, What Possibly Could Human Prayer And Fasting Add To The Remedial Mixture?


The general explanation for the additional need for believers to fast and pray is that the vessel which Jesus uses must be clean.  Prayer and fasting apparently help one to see his or her own faults, ask for forgiveness, and become more clearly focused.   This makes no sense at all.  If the name of Jesus can't do the job unless we clean up our act a little or join forces with more of our fellow believers to combine our faith, then it's not powerful at all.  Then the verse should say something like this instead: "Whatever group of believers comes together and works out their problems and comes into unity and uses my name will be able to cast out devils so that I may give glory to God through my people."   This is nonsense.

Problem #3: The Person Who Is Exorcised Isn't Supposed To Die, Are They?


Latisha Lawson of Fort Wayne, Indiana, was recently convicted of killing her son Jezaih while trying to exorcise her four children of devils.  She was forcing them to drink olive oil and vinegar.  No doubt this idea was received from her fanatical friends or her own personal prayer and fasting.  Olive oil is commonly used in Christianity as "anointing oil" and vinegar was put on Jesus' lips at the time of his death.  According to John 19:23-30, when Jesus was given the vinegar, he bowed his head and gave up his spirit.  So no doubt in the mind of this believer, what could it hurt to give them annointing oil and vinegar.  My posts over the last year have repeatedly made the  point that the Bible cannot be the words of a real god, for why would god put such words into the hands of so many mindless human beings so that their twisted minds could, in faith, commit such atrocities? Click Here For The News Article

In another case, Sangeeta Persaud was allowed to die in Canal Number Two, Guyana, in April of 2010 when she experienced convulsions.  Her superstitious grandmother took her  to a small concrete church where several elders spent five hours praying for her, pressing on her head, pressing on her stomach, and making her drink "anointing oil."  They said she would bark and make strange noises.  Well here's an enlightened piece of information: people who go into convulsions and are made to drink liquids do frequently make all kinds of noises.  You can read about the sad and fanatical story here: Click Here For Story 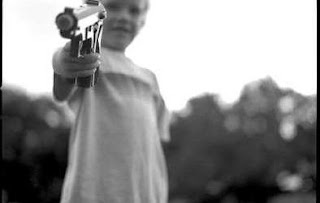 It is amazing to me that in these modern times over half of the world believes in either the Bible, the Torah, or the Koran.  These books are filled with passages that keep crazy people doing crazy things.  And I do not believe a wise and loving god would encompass his will for mankind within such contradictory, confusing, fanatical and out-of-date texts.  To put such books in the hands of everyday people, not to mention the cloistered clergy, is tantamount to putting a loaded gun in the hands of a child: in this case the hands of people who wanted better for their children, but killed them instead with their faith.
Posted by Kirby Clendenon at 10:05 AM