Who's Your Daddy Christian Style 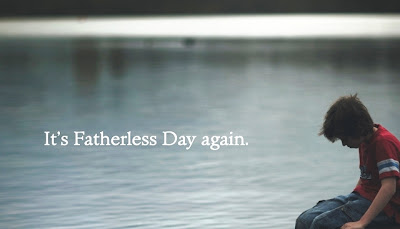 Too often we see children whose fathers failed to take responsibility for their night of passion, abandoning their offspring, leaving them to be brought up by their mothers. Oftentimes they wind up becoming wards of the state, shifting from one foster home to another.  When these children grow older, they often wonder, "Where is my father?  Why did he go away?  Why can't I find him?  Why doesn't he try to contact me?"  Until that child finds the strength to move on and leave these questions in the past, he or she may drift about lacking direction, purpose, and self worth.

I studied the Bible, prayed, and sought God for thirty years of my adult life.  I believed John 1:12: "Yet to all who received him, to those who believed in his name, he gave the right to become children of God."  For those thirty years I sought to know my heavenly father.  After all, didn't 2 Chronicles 15:2 say, "If you seek him, he will be found by you."  And in the New Testament isn't Jesus recorded as saying in Matthew 7:7, "Ask, and it will be given to you; seek, and you will find; knock, and it will be opened to you?"  I was convinced that I would find  my heavenly father.

Luke 11:13 assured me, "if you then, though you are evil, know how to give good gifts to your children, how much more will your Father in heaven give the Holy Spirit to those who ask him."  I didn't think it was unreasonable to believe that the Holy Spirit would come to me if I only asked my distant heavenly father.  And I was excited because the Bible tells some of the things that are supposed to happen when the promised spirit comes.  So I asked.  I believed. I anxiously and expectantly awaited the promises, which were many:

Many have told me I expected too much, but I am the sort of person that takes someone's word for its obvious and primary meaning.  I do not feel like I expected too much.  But the fact was that my studies of the Bible and its lack of being what it claimed to be led me to question its veracity more and more.  In fact I noticed the following:


1. I seemed to be guided away from the Bible and its teachings.  They seemed harder and harder to believe.
2. Everything I put my hand to do was not blessed.  We seemed to struggle in my business financially and never got ahead.
3. I could not confirm that I had received any Spiritual Gifts.
4. My children were becoming very disinterested in religion.
5. My office was burglarized and my home was burglarized.  We lost a lot of important things and the inside of our home was really ransacked.

Either the Bible was false or something was wrong with me.  My wife and I decided that we were believing with all the faith we could muster.  We decided the problem wasn't with us.  And our studies were leading us to doubt the Bible more and more.

I do not believe in Christianity anymore, but if I did, I would be the little boy in the picture above.  Where was my heavenly father.  He had promised to send the Holy Spirit if I only asked.  He made a lot of promises in his letters, but he never kept them.  I had to get on with my life, so I wrote Surrender of Sovereignty for my family to explain my reasons for leaving our traditional faith.  A few have read it, many have not.  I believed for the 30 to 100 fold return on my faith for years (Matthew 13:23), but seemed to notice nothing other than the imaginations of my mind. There really is a point where the fatherless have to let go and get on with their lives.
Posted by Kirby Clendenon at 12:16 PM