The Bible Writes Checks That Can't Be Cashed 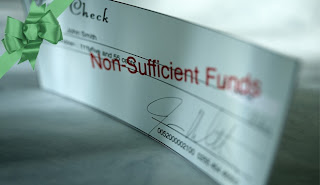 Why Christians Believe the Bible is the Word of God

In the Bible, 2 Samuel 22: 31-33 declares, "As for God, his way is perfect;  the word of the Lord is flawless.  He is a shield for all who take refuge in him.  For who is God besides the Lord?  And who is the Rock except our God?  It is God who arms me with strength and makes my way perfect."

Further, the Bible records Jesus explaining a parable to his disciples.  The parable is about a farmer who throws seeds out onto a path, onto rock, into a thorn patch, and finally onto some good soil.  He explains to them, "The knowledge of the secrets of the kingdom of God has been given to you, but to others I speak in parables, so that, 'though seeing, the may not see; though hearing, they may not understand.' " The disciples were to scatter the seeds of the Word to the world.  Some would accept it and some would not. They would be filled with the Holy Spirit and go out and preach the Word as is recorded in Acts 4:31: "And they were all filled with the Holy Spirit and spoke the word of God boldly." Therefore:

God = The Word = Jesus = Jesus' teachings = the disciples teachings in the world.

It is not hard for Christians to believe that every text in the Bible is flawless.  But the point of this post is that the Bible is chocked full of bologna.  When I was a Christian, I believed many of these promises and never saw them amount to anything.

Here is a list of some of the humungous "Bible Bounced Checks:"

Wow!  So if God promised Abraham that all his children would be blessed, then I can claim that promise as well.  And if God told Joshua that every place he set his foot would be given to him, then I can believe that too?  Or if an angel promised a man in Caesarea that Peter would come to him and preach a message that would save not only him, but everyone in his household, then I can believe the same for all of my household. The whole bible became a "Faith Coupon Book."

2. Jesus said, "I tell you the truth, anyone who has faith in me will do what I have been doing.  He will do even greater things than these, because I am going to the Father." John 14: 12.

Several chapters before this Jesus is recorded as making this statement, he raised Lazarus from the dead.  When one of my best friends' sons died suddenly from a seizure, I travelled to his house,  prayed most of the night, and then went in and called him forth like Jesus did for Lazarus.  As of this day, after more than  twenty years, that son has not come forth.

3."I tell you the truth, if anyone says to this mountain, 'Go, throw yourself into the sea,' and does not doubt in his heart but believes that what he says will happen, it will be done for him.  Therefore I tell you, whatever you ask for in prayer, believe that you have received it, and it will be yours." Mark 11: 23-24

4. "Whoever believes and is baptized will be saved, but whoever does not believe will be condemned.  And these signs will accompany those who believe: In my name they will drive out demons; they will speak in new tongues; they will pick up snakes with their hands; and when they drink deadly poison, it will not hurt them at all; they will place their hands on sick people, and they will get well."
Mark 16: 16-18

The Bible is not god's word.  It is a compilation of many different and unknown authors.  It has been redacted, changed, deleted, added to, embellished and translated every way imaginable.  The earliest  parts of the Bible were written around 900 B.C. by an unknown author in the court of King Solomon to create a history and national heritage for Israel so that they might be able to hold their head high among the nations surrounding them.  Read my book, Surrender of Sovereignty, for a play by play description of how the Bible came into existence.

Posted by Kirby Clendenon at 1:10 PM No comments: